Robin Garbose, the Jewish director who earned headlines for her female-only screenings, is at it again, scheduling showings of her latest film in 11 American cities over the upcoming Passover holiday.

Crowds of fans turned up for the premiere of “The Heart That Sings” last month at the Jewish Children’s Museum, headquarters of the Chabad-Lubavitch youth organization Tzivos Hashem, in the Crown Heights section of Brooklyn, N.Y. They filled every last seat – a total of 700 – in the venue, cheering as Garbose’s name appeared on the screen.

(The premiere in Los Angeles the day before also sold out, attracting 600 mothers and daughters at the city’s Museum of Tolerance.)

Many students from Beth Rivkah High School, the largest Chabad girls’ school in Crown Heights, arrived at the children’s museum eager to see friends and classmates appear in the film.

Fourteen-year-old Malka Kugel, a Beth Rivkah student, plays one of the mean girls in the musical, which tells the story of a young Holocaust survivor named Miriam who spends a 1950s summer as a drama director at a camp in the Catskills Mountains of New York. At first, the campers take advantage of Miriam’s quiet, broken spirit, but in the end, they transform each other in a magnificent way.

“When we were filming, it was magical,” she said. “Everything we were taught came together.”

Garbose’s first film, “A Light for Greytowers,” was released three years ago and proved to be a hit, especially among religious teenage girls. Set at a Victorian orphanage in England, it revolves around a young girl, also named Miriam, who is separated from her parents after escaping Czarist Russia. She fights to observe her Judaism in the orphanage under the rule of a cruel matron.

“Greytowers” screened to 50,000 women in cities across the United States, Canada and Israel, including at major venues such as the Atlanta Jewish Film Festival, the Jewish Eye World Festival in Ashkelon, and the Jerusalem and Tel Aviv Cinematiques. It has been available on DVD since Chanukah and has already seen 5,000 sales. 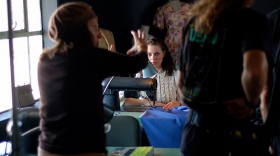 Breaking the Ice
With “The Heart That Sings,” Garbose anticipates even greater numbers. She has already received about eight solicitations from film festivals and believes this film can reach a broader audience with its Holocaust theme and cinematic quality.

“There’s something so compelling about the character of Miriam,” Garbose said at the movie’s premiere.

“We’re not used to seeing a beautiful young woman with a number on her arm,” Garbose continued. “It makes you experience the Holocaust in a new and emotional way.”

Armed with now two films, Garbose is creating a new genre in the world of women’s entertainment. Both are movie musicals featuring religious actresses, singers and dancers trained at Kol Neshama, her performing arts conservatory in Los Angeles. Because of Jewish laws of modesty that allow women to sing and dance only for other women, opportunities are sparse for talented girls and women wishing to perform professionally.

“We broke the ice with Greytowers” by ensuring the film screen to female-only audiences, explained Garbose.

Yocheved Daphna, whose daughter Golda attended Kol Neshama and acts in “The Heart That Sings” cried through the movie’s premiere.

“I’m so glad they have an outlet in a proper environment for actresses, singers and dancers,” she enthused. “To have a first-class project with a professional to fine tune their skills” is unique.

Garbose discovered Rivka Siegel, who played the lead role in both “Greytowers” and “The Heart That Sings”, when she was acting in her eighth-grade play years ago. Upon seeing such talent, Garbose was motivated to soon open Kol Neshama.

Garbose said she “wrote the [“Heart”] script with Rivka in mind because of her emotional depth.”

Siegel said that Garbose often gives her roles of powerful women and she loves that.

“I loved the character [of Miriam in “The Heart that Sings”],” she stated at the premiere. “She had many layers, and is an amazing character.”

Last summer, girls from all over the United States who attended the Kol Neshama program rehearsed for four weeks and then shot the movie under Garbose’s direction in only 18 days. 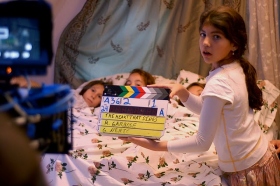 Garbose hired a professional Hollywood crew to shoot at several locations in and around L.A.: a beautiful shooting ranch on a far-out valley for exterior shots, an RV park for interiors and downtown for some Manhattan-style architecture. She rented period cars from the late 1940s and found Brooklyn props to properly replicate that era.

Made on a small budget by Hollywood standards – the film cost $350,000 to produce – Garbose attained completion funds through a clever online fundraising campaign on Kickstarter.com. Using the number 18 – the numerical value for the Hebrew word meaning “life”- Garbose reached her goal of raising $18,000 through incentive awards for backers who pledged money.

A director for 27 years, Garbose said: “It’s time for authentic Jewish content to emerge in the world of film.”