You are here: Home / featured / Jewish Press: Not A Camp, An Experience

True performers look for every opportunity they can to exercise their talents, so when summer comes around, the numerous camps and jobs targeted to the average fun-loving girl just will not do. Performers need something bigger: Kol Neshama. As Robin Garbose, the director, puts it, “Kol Neshama is not a camp, it is an experience.”

Ever since I can remember, I have loved to act. I always knew it was what I wanted to do, and it was hard for me to see so many people being able to live out my dream while I remained limited. I spent years searching for a way to do what I love in a “kosher” way. Finally, I found Kol Neshama. Last summer I played a role in the upcoming Kol Neshama film, The Heart That Sings.

There are not many opportunities today for young frum performers to explore and improve their acting abilities. Kol Neshama features many classes taught by professionals who work with a group, as well as one-on-one, to make sure each girl reaches her full potential. The focus in acting class was on improvisation and characterization. My character, Pearl, is the antagonist in the film and getting to act mean was different and exciting for me. I had to justify Pearl’s actions in order to give her a sense of authenticity – she doesn’t believe she is doing anything wrong.

Girls came from all over the world, each with her own unique talents, and I learned so much just by watching everyone. There was always a supportive environment, encouraging each girl to try something new and reach beyond her comfort zone to expand her abilities. With everyone’s help and constructive criticism, our characters grew into relatable human beings.

All the rehearsals, classes, and workshops led up to the long-awaited filming of the movie. Filming on location, we had the unique experience of working on a professional movie set in a frum, caring environment. Each crewmember was willing to answer any question about his or her job. One day when one other girl and I weren’t needed on set, the stunt coordinator taught us how to stunt fight. We were on set for many long days during the shoot and had a lot of free time between scenes. This provided us with the chance to really get to know each other and form relationships that will last a lifetime. The family bond we had with each other added to our over-all performance, making it easy to experiment with different reactions on camera without being scared to make a fool of ourselves. 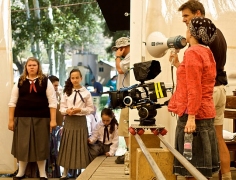 Throughout the summer, each girl discovered new talents and interests she had not known about before. Robin Garbose gave some girls the opportunity to work as a part of the crew. Not only did the crew appreciate the help, but it helped the girls realize the potential their new-found talents held for them. Those girls still were able to perform on camera, but had the extra advantage of being involved behind the scenes. Additionally, Shaindel Antelis, one of the madrichot and a professional recording artist, taught us many songwriting and performing techniques. As a result of these extra opportunities, Kol Neshama has produced many skilled future directors, screenwriters, cinematographers, and songwriters.

Kol Neshama is an outlet for girls of all ages to express themselves through the performing arts. As well as being an enormous Kiddush HaShem, it marks the start of a whole new genre – professional, frum movies for women only. I am so thankful for the opportunity I was given to attend this camp. I grew so much not only as an actress, but as a person. Kol Neshama offers the chance to be a part of something truly revolutionary.