Can a young holocaust survivor direct a drama program in a 1950s Catskills summer camp? Robin Garbose, an accomplished Hollywood-based Orthodox film director tackles the question with a movie musical, where lead character Miriam is initially a quiet and broken spirit, but she and her campers are both transformed by their interactions.

“We broke the ice with Greytowers,” Garbose said, describing how her 2008 film paved the way for young talented women to perform professionally in a modest way acceptable to Jewish tradition. Last summer, girls from around the country rehearsed for four weeks and then shot the movie in only 18 days. An extremely short shooting time for a feature length film, the new actresses were required to awake for five a.m. casting calls. 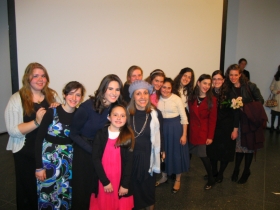 Brooklyn resident Malka Kugel, 14, was never trained in acting before attending Kol Neshama. Kugel said she felt “like a professional actress” after merely seven weeks in the program. “When we were filming it was magical. Everything we were taught came together,” Kugel said. Garbose hired a professional crew to shoot at several Los Angeles locations: a ranch on a far-out valley for exterior shots, an RV park for interiors, and downtown for some New York-style architecture.

Made on a Hollywood-standard budget, the film cost $350,000 to produce with completion funds raised through a clever online fundraising campaign on Kickstarter.com. Using the number 18– the gematria value for “Chai” or “life”- Garbose reached her goal of raising $18,000 on Kickstarter through incentive awards for backers who pledged money.

The film’s score was composed by her husband Levi Yitzhaq Garbose and the plot is based on the short story “Miriam’s Lullaby” by Gershon Kranzler. Kol Neshama staged the story as a play twice before Garbose turned it into a screenplay. Her previous work “Greytowers” screened to 50,000 women in cities across the United States, Canada and Israel, including at major venues such as the Atlanta Jewish Film Festival, the Jewish Eye World Festival in Ashkelon, and the Jerusalem and Tel Aviv Cinematiques. It has been available on DVD since last Chanukah and has already seen 5,000 sales.

With “The Heart that Sings,” Garbose is anticipating even greater numbers. She has already received eight solicitations from film festivals and believes this film can reach a broader audience with its holocaust theme and cinematic quality.

“There’s something so compelling about the character of Miriam,” Garbose said at the film’s premiere in March at the Jewish Children’s Museum in Brooklyn. “We’re not used to seeing a beautiful young woman with a number on her arm, it makes you experience the holocaust in a new and emotional way.”

Garbose began her theater career teaching at Juilliard and New York University, and directing 35 plays in Los Angeles and New York. She then dabbled in television, directing Head of the Class and then—as a Sabbath observant director—America’s Most Wanted. In total, Garbose has directed films for 27 years, 21 of them as an Orthodox Jew. Garbose added, “It’s time for authentic Jewish content to emerge in the world of film.”